Vintage: Oriental Beads with a Story to Tell

We love learning the history of the beads that we unearth for the site. Some beads are discreet about their origins, some simply refuse to give any information away despite the use of arm-twisting, and others with a little encouragement sit down and starting chatting until the light fades from the sky. We had the pleasure of meeting some of the latter beads recently and they are now on Big Bead Little Bead for your perusal and maybe one or two will be able to add their tales to your own.

We first met our friends through the wonderful world wide web and that well-known internet auction site. They were for sale as a job-lot, pictured in a rather nice wooden cigar box, but unfortunately photographed really badly so that it was very difficult to see any detail on the beads. We liked the look of the cigar box, and we judged that one or two of the beads looked like carved wood and worth a closer inspection, so we took a chance and placed a bid. Sadly they arrived independent of their handsome display case, but upon opening the envelope all was forgiven, for we had landed a stash of really unusual lacquered beads, along with some glass and agate / carnelian. 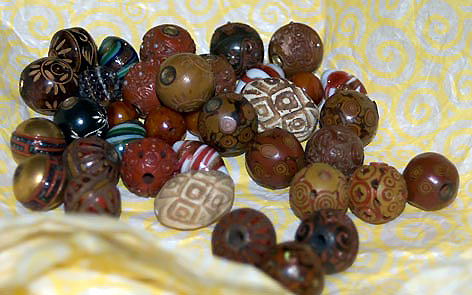 The lacquered beads immediately introduced themselves as hailing from the Far East, so we contacted the vendor to see if he could let us know any more information about their origin. This was when the beads stopped talking. They were part of the vendor’s late mother’s effects, and she was, by his account, a magpie. We got the impression that she was a frequenter of church fairs and charity shops rather than a lady of means who spoiled herself at Christies every once in a while. We also asked the vendor whether his mother or family had any connection with Japan or China, but again the trail went cold with a negative answer.

Our next step, and hooray once again for the internet, was to go online and get Googling.

Eventually after a lot of sleuthing and inputting tangential keywords the trail picked up, as did our hopes, as we came across these beads on Christie’s Auction House website. At least two of the beads shown were close matches to some of our newly arrived beads, with the same lacquered surface, the same colouring, and the same style of surface decoration with tiny seed pearl embellishments. The Christie’s beads had been identified as Ojime, so our next question was . . .

You may well have heard of their better known brothers, Netsuke. Both ojime and netsuke were decorative and functional parts of the Japanese Inro, a small solid container that functioned as a pocket or purse, and hung from the waist sash of the kimono. Originally inro were used mainly for carrying herbs and medicines or seals. They were a solution to the fact that kimonos had no pockets, but became an excuse also to display wealth, aesthetic appreciation and craftsmanship as wealthy samurai commissioned inro from talented workers in wood, lacquer, ivory and metal. The inro consisted of separate stacking parts, held together by cords. The cords ended with a netsuke, that was used to anchor the inro as it was suspended from the waist (see the image below showing an inro from the Victoria & Albert Museum, London). 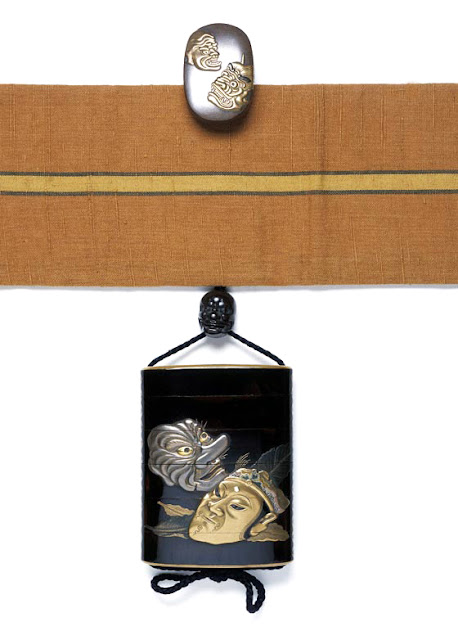 The ojime is the bead that the cords ran through (the skull bead in the example shown above and labelled in the illustration below). It functioned as a way of closing the inro, holding all the component parts together. Ojime of the type auctioned by Christie’s had a brass tube at their core to allow the smooth running of the cords. Many of our beads also had a brass tube within their hole. 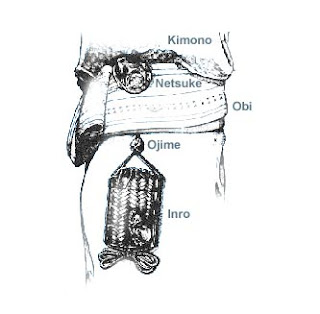 To try and get confirmation that we had in our possession a stash of ojime we contacted various groups of collectors and individuals - again we found their details online - and we were more than pleasantly surprised how quickly we received responses and how generous people were with their expertise, including Frederick Chavez, a respected collector and expert in this field. From the information we were given all of the beads were thought to originate from Japan. However it was possible that they were made for the western market and for decorative use only, rather than being functional beads used on an inro. One expert mentioned that Liberty's sold strings of beads of exactly this type, as illustrated in their catalogues from the 1900s to the 1920s. The strings were worn as necklaces and also were known to have been used to weight the four corners of a black silk tablecloth placed on a bridge table (hung from silk tassels). Sadly, they are not quite as valuable as the high-end, hand-crafted beads on the Christie's site. However, less valuable does not mean less interesting, and it at least means more affordable!

The first four beads shown are all lacquered. Multiple layers of coloured lacquer were applied and then facets were taken from the curve of the bead to reveal the layers beneath and thereby creating bull's eye patterns.

These beads were also produced by cutting into layers of different coloured lacquer. This time a geometric pattern segments the two halves of the bead. 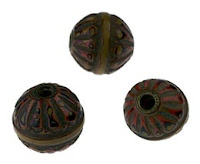 This bead has tiny insertions/inlays of abalone shell amongst the patterning created by the layers of lacquer. 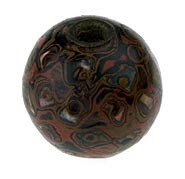 The following beads are made from a resin or early plastic and were made in a mould. The seam line is just visible if you look hard. The tiny pearls are most likely to be small beads of glass. The design is that of small flowers within curving lines representative of the movement of the wind/flow of water.

These are also resin/plastic and moulded. The motif on these is a dragon that undulates around the bead, tongue flicking and tail swirling.

This set of three beads are wooden with stamped and drilled decoration.

The next two beads are thought to be wooden with a coating of gold lacquer and inlays of abalone shell.

The following beads were part of the same collection, and are also thought to be Japanese in origin and again from the 1900s to 1920s, but are obviously quite different in appearance. The first pair, at first glance, look like they might be made of bone or hone in imitation of ivory. It was suggested to us that they might be made of marine ivory, or that these too have been made from casein or some other form of plastic. From a close look at them it is still very difficult to come to a conclusion other than we are pretty definite they are not bone as they are too weighty. 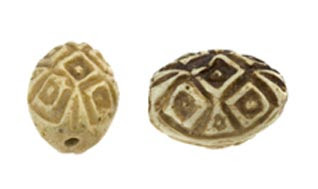 More straightforward are these lampworked beads, made by wrapping molten glass around a mandrel. Both colourways include a ribbon of aventurine (glass with fine particles of copper).

So the beads told their tales to us, and from listening to both collectors and traders it is very likely our ojime were produced in the first couple of decades of the 20th century for the Western market. Trade with Japan only truly opened up during the latter part of the 19th century, but the novelty (and beauty) of the goods that were traded engendered great interest in all things Japanese and the high-quality of craftsmanship exhibited led the fashion for Japonaiserie to be integral to both the Arts and Crafts and the Art Nouveau aesthetic within England. The Liberty's store in London was a key source for the fashionable rich to go to purchase the dernier mot in Arts and Crafts and antique furnishings, and therefore the perfect stockist for strings of ojime style beads for the Japanoiserie enthusiast. I would love to see a copy of their catalogues from the first decades of the 19th century to see the beads listed - a trip to the British Library to the V&A might be on the cards.


To see incredibly beautiful, intricate hand-carved authentic ojime, have a drool over the antique netsuke and ojime on this site, and also the ojime bead necklace sold through Sotheby's.


To buy any of the beads featured in this post, please head to www.bigbeadlittlebead.com

Pin It
Posted by Unknown at 10:25
Email ThisBlogThis!Share to TwitterShare to FacebookShare to Pinterest