The modern history of Czech glass bead making is closely allied to the impact that the First and Second World Wars and the subsequent Cold War had on the region as a whole. The region where glass-making production is centred was formerly known as North Bohemia (hence the term sometimes used, bohemian glass).

North Bohemia had been a European glass-manufacturing centre since the 13th century because it was rich in the natural resources needed for glass-making, namely quartz (mined) and potash (from the region’s forests – and handily a by-product of the wood burned to heat the glass). The cities of Jablonec, Stanovsko and Bedrichov (modern Reichenberg) all produced glass beads, mainly for use in rosaries, but from the second half of the 16th century, when costume jewellery become fashionable, they started producing beads to be used more decoratively. The industrial revolution of the 19th century saw the development of machines that allowed mass production of moulded pressed shapes, so thousands of identical beads could be produced cheaply. The mechanically shaped beads were a real innovation in terms of glass making history, as little had changed technically for many centuries. The pressed beads were not made around a mandrel, instead a rod forming the hole was pushed into the mould, and this meant that the hole could theoretically be placed in any position and multiple holes could be introduced. The moulds allowed complex shapes to be made and by making use of patterned canes (the glass rods fed into the machine) the resulting beads could be elaborately coloured, giving the beads a slightly random appearance, even if the shape is exactly the same. Mass production saw the expansion of the industry and Czech beads were exported around the world. The actual making of the beads, on the whole, remained a cottage industry, in that machines and moulds were bought and used by individuals who would work from home to supply the companies that would trade the beads. Family homes that produced glass beads could / and can be identified by their tall chimneys and roof vents. The images below date back to 1845. 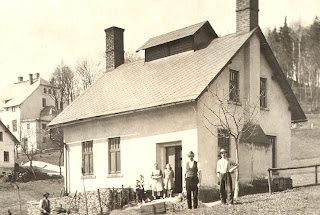 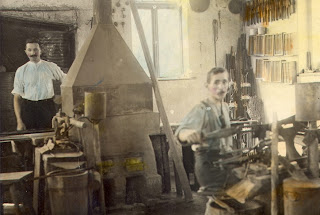 Czech bead manufacturers also were innovative in their salesmanship and in providing the consumer with what they wanted. ‘Sample men’ travelled worldwide to speak with buyers and determine what would sell best in each market. They then returned to Czechoslovakia and advised on designs for sale to these markets. This proactive approach was highly successful, increasing the sale of and demand for Czech glass beads.

In 1918 after the First World War, North Bohemia became part of Czechoslovakia. By 1928 Czechoslovakia was the largest bead exporter in the world. However, trade was then affected by the depression that hit the global economy in the 1930s, followed by the Second World War, and it did not pick up again until the 1950s. After the Second World War Germans who had lived in the Northern Bohemia region (most for all their lives) were forced to leave the area, and those who were glass bead makers took their skills with them. Many resettled in Germany and the town Neu Gablonz was named for the bead makers that set up new businesses here.

From 1948 Czechoslovakia had a Communist government who did not see glass bead making an approved industry. They restarted the industry in 1958 only in an effort to trade out of Czechoslovakia in return for hard currency. The communists nationalised the industry, which meant the industry became factory based, rather than supporting individual home-based workers. A single state run monopoly, Jablonex, established 1951/2, controlled all exports out of Czechoslovakia involving glass and beads – at one point previously there had been over 2,000 agents exporting glass. 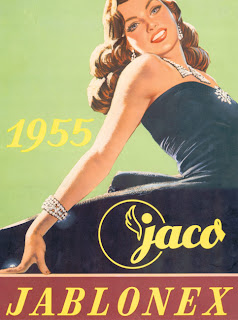 The glass making industry has been revived, and once again supplies high-quality beads to the global market. Although it is the large operators that dominate (Jablonex still exists, now as a non producing conglomeration) there has also been a return to small-scale production by individuals supplying a local factory, using machine methods very similar to those employed in the 19th century but with improved technologies. 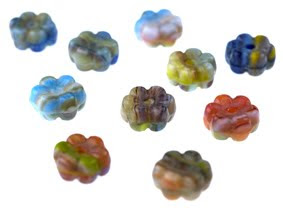 We at Big Bead Little Bead really like Czech glass beads. We love their colour range, quality and their heritage. They are perfect for both contemporary pieces and for recreating a vintage look. We provide the colour code for each bead – common to all Czech glass manufacturers, including Preciosa crystal – i.e. 23980 is jet black, so it is possible to search the site using this colour code to find beads.  However please note that slight variations in shade are unavoidable due to the production process and the size and shape of the finished product. Small beads and large beads made from the same glass colour can have a tonal difference, but this adds interest when the two are used together.

Pin It
Posted by Unknown at 09:55
Email ThisBlogThis!Share to TwitterShare to FacebookShare to Pinterest

This is a beautifully written synopsis of the history of Bohemian glass bead making. Thanks so much for this post. Elizabeth Ward