We recently took a few samples of these blown glass beads as we were curious to see the quality of them before we placed a larger order across the range. 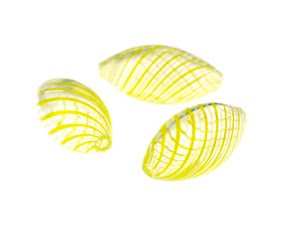 They are Chinese glass in imitation of Murano blown beads. Although clearly not quite up there with the Italian originals, they are delicate, light and quite fabulous in their own right (and a lot cheaper!). I used some in my necklace design Spring Sublime, where they both compliment and off-set the ceramic and polymer clay beads. The zesty lemon torte colouring makes my mouth water. 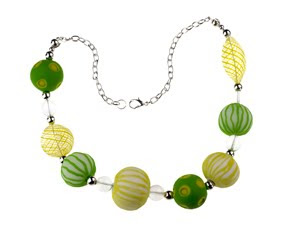 Blown glass beads use some of the oldest techniques in glass making. The first artisans to discover that blowing through a tube into the heart of a blob of molten glass could produce an object with a hollow core, were Syrian craftmen working some time between 27 BC and AD 14.  It was those clever Romans who then figured out that combining this technique with a mould could create all manner of exciting hollow glass vessels and other items.  From there it is a small leap of the imagination to create blown glass beads, which can be produced singly or using a mould to produce a small run of beads that are later cut up.  Centuries later it was discovered that you could blow a decorative finish or colouring inside a transparent bead or ornament, imitation glass pearls and a gazillion Christmas tree ornaments resulted.

During the 16th century Venetian glass makers on the island of Murano started to produce blown glass items, including beads, using canes of clear glass with a central core of coloured glass. The items produced using this technique are referred to as 'filigrana', or, in English, 'filigree glass' because the resulting fine thread decoration is similar to filigree-work produced by goldsmiths. If the patterning produced is a spiral then the glass is known as 'a retorti', 'a retortoli' or 'zanfico'.  If a grid or net pattern is produced using a very difficult technique where one piece of spiral patterned glass is placed within another, then the glass is known as 'reticello'. The air bubbles trapped in each square of the 'net' are characteristic of this method. 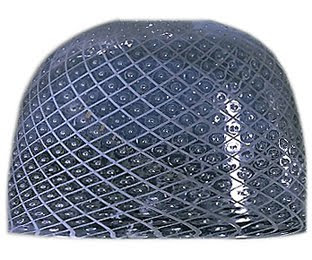 Above: Glass Goblet made in Venice in 1896, Salviati & Co.  Glass illustrates the use of 'a reticello' technique, and clearly shows the bubbles captured between the two layers of glass.  V&A Museum, London

The Italian website www.glassway.com has footage and clear images of items being produced using the filigrana technique.  Any sound during the videos will be your jaw hitting the floor.  A scaled down lamp-worked version of this technique is used to produce Murano blown glass beads, and it is this that our Chinese beads emulate using the same methodology applied on, presumably, a larger scale.  I love the fact that something so small and unassuming is the result of the creativity and skill of artists working many centuries ago, who would recognise their own daily labour in the beads produced today. 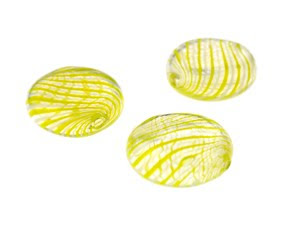 Big Bead Little Bead currently stock the blown glass beads illustrated here. If you decide you love them like we do, then we shall expand the range when we restock.

Pin It
Posted by Unknown at 09:48
Email ThisBlogThis!Share to TwitterShare to FacebookShare to Pinterest

Hi , just to say I have really enjoyed reading about the history of the beads , and the other tips also :).The cleaning silver tip also works with lemon juice or vinegar and salt. Thanks ,Linzi