Miriam Haskell, seen below, was a celebrated American jewellery designer and business woman. She was noted for her original but affordable hand-made costume jewellery, which successfully reflected, and was sensitive to, both the economic times and historic events in America, be it the Great Depression of the 1930s or the war years of the late 1940s. Coming to the fore in America at a time when Coco Chanel had just launched her vrais bijoux en toc, or real fake jewelry, collection in Europe, Miriam was able to ride on an American obesssion with French fashion and model her early jewellery on European costume jewellery, competing directly with Chanel and Italian designer Elsa Schiaparelli. One of four children, she was born in the small town of Tell City, Indiana, to her Russian Jewish immigrant parents. They owned one of the town’s dry goods stores carrying fabric and cloth, somewhat akin to an English haberdashery store. Miriam progressed through High School in nearby New Albany before studying at Chicago University for three years, but without graduating. In 1924 Miriam set off for New York City with a fabled $500 in her purse, more than likely loaned to her by her shop keeper father. On the 30th July 1926 a business permit was issued in Miriam’s name, allowing her to open a gift shop style boutique –Le Bijou de L’Heure – in The McAlpin Hotel on 103 Sixteenth Street. 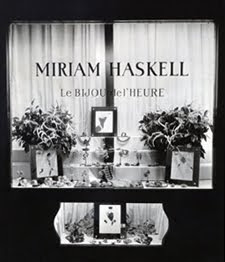 That same year, Miriam was joined by Frank Hess, a window dresser from Macy’s, who became her jewellery designer. With Miriam providing the business acumen a second shop was opened within a year at West Fifty Seventh Street. Continuing success saw the company relocate to 392 Fifth Avenue in the 1930s, going on to open outlets at Saks Fifth Avenue and in Burdine’s department stores, as well as a boutique shop in central London. In this short time frame Miriam had established herself as the owner of a costume jewelry company, with a clientele of society women including Gloria Vanderbilt, movie stars such as Joan Crawford, and Lucille Ball, and royalty in the form of Wallis Simpson, the Duchess of Windsor. In fact, it is said that Joan Crawford was such an admirer of Miriam Haskell designs that she collected nearly every piece that was produced from the 1940s to the 1950s (all to be auctioned off by New York’s Plaza Art Galleries upon her death in 1977). Publicity shots of these celebrities and others wearing her jewellery, along with design credits for films and theatre productions, and interviews all confirm her status within these illustrious circles. As a friend of Coco Chanel’s she also created pieces for Chanel’s couture collections.

During the Great Depression, which in America hit in 1929 and lasted a decade, Miriam Haskell’s costume jewellery provided affordable pieces which matched the glamour of the time, but used cheaper art glass, strass (paste) or rhinestones, and gold plate parures to achieve the look. When the economy merited it Miriam used more expensive natural gemstones alongside handmade beads from Czechoslovakia, France, Germany, Italy, and Russia, whilst incorporating unusual metal findings and stamps in the designs. Whilst many of her signature pieces were known for their use of faux baroque pearls, Russian gold filigree metal work, and the inclusion of nature in the form of berries, leaves and intricately detailed flowers. She would often travel with Frank Hess to Europe on buying trips to Paris, Gablonz, Venice, and Wattens in Austria, which was the location of the Swarovski crystal factory. With European bead supplies curtailed during the Second World War, she in turn contributed to the war effort, asking Frank Hess to create patriotic new metal free jewellery designs, using natural materials and plastics, with the required beads and crystals purchased closer to home. After the war, Haskell renewed her use of high end materials, including pearls from Japan, and her designs became ever more colourful and vibrant. They also became more elaborate including larger focal pieces, and necklaces with multiple bead strands.

Running clockwise from left to right Egyptian Earrings c1925, a Flower Brooch in Mother of Pearl c1935, a Pearl Lily Brooch c1935, and a Naturalistic Gold and Pearl Brooch c1930 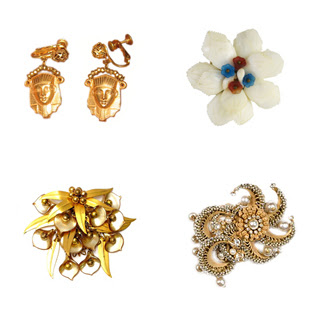 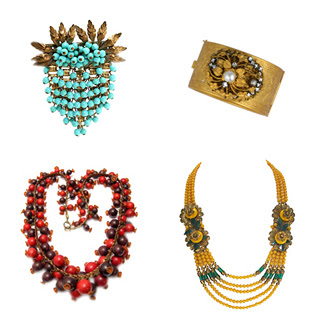 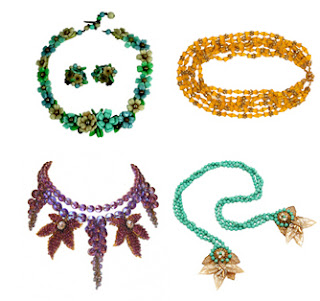 As with all success stories there has to be some degree of controversy. On this occasion it lies in whether Miriam was an artistic force within the company or ‘merely’ the business brains, and whether the credit for the jewellery should really lie solely with Frank Hess. Her nephew, Malcolm Dubin, who looked after her in later life, is often quoted to confirm the strong hand that she had in the overall designs as well as individual pieces. Regardless, what is undeniable is that, like fashion designer Hattie Carnegie before her, Miriam was a strong independent women who built a ground breaking company from scratch that still bears her name today. All the more remarkable because she was operating in an industry run by men, be it the company owners, the designers, the craftsmen, or the salesmen. It is also inconceivable that the Miriam and Frank would not have collaborated on the jewellery designs if only in terms of outline and direction, as this would have been key to growing the business. And as can be seen in the advertisement below and in the example jewellery pieces above, the results really do speak for themselves – pointing to the perfect partnership of artistic taste and business acumen! 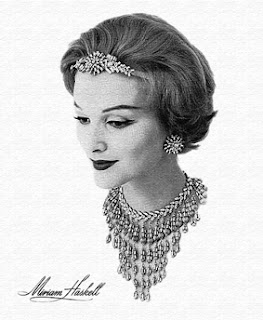 Being a strong independent woman also saw her take a number of prominent and influential lovers including Florenz Ziegfeld, who decorated the chorus line dancers of his Ziegfeld Follies with her designs, Bernard Gimbel of the Gimbels department store chain which included Saks Fifth Avenue, and John D. Hertz, Jr., only son of the founder of the Yellow Cab Company and the Hertz car-rental group.

In 1950, Miriam was forced to sell the company to her brother Joseph Haskell, due to poor health. It is said that the horrors of the Second World War began to affect her health and emotional stability, and the opportunity was taken to rest control of the company from her. Living in an apartment on Central Park South with her widowed mother through the next two decades, her erratic behaviour intensified and she displayed symptoms of depression and obsessive compulsive disorder. In 1977, she moved to Cincinnati, under the care of her nephew Malcolm Dubin, where she later died at the age of 82, on the 14th July, 1981.

In 1954 Joseph Haskell sold the company to Morris Kinsler. Frank Hess continued to design for Haskell until 1960 when he went into semi-retirement. Hess was succeeded by a number of high quality head designers, namely Robert Clark (from 1958 to 1968), Peter Raines (from 1968 to 1970), Larry Vrba (from 1968 to 1978), Roberta Stone (in 1979), and Camille Petronzio (from 1978 to date). The company was sold again in 1983 to Sanford Moss, who had been an employee of the company since 1958. In turn, Moss sold the company in 1990 to Frank Fialkoff with whom it still resides today. Renamed Haskell Jewels Ltd, it produces the luxury Haskell Line, with every piece still handmade in NYC often utilising the jewellery house’s vast supply of vintage beads and filigrees, as well as M. Haskell which is termed trend based jewellery aiming to be on the cutting edge of fashion. They also produce several private label jewellery lines under licence for Betsey Johnson, J Lo by Jennifer Lopez, O Oscar by Oscar de la Renta, and Christopher Radko’s jewellery. In 2008 they partnered with Kenneth Cole jewellery.

Today Miriam Haskell jewellery, particularly that from the golden period of the 1940s and 50s, is much sought after by collectors of vintage costume jewellery and can command high prices, though it is still possible to find reasonably priced pieces on auction sites, as well as left over stock of beading materials and findings which didn’t find their way into her end pieces. It is worth noting that her jewellery was very seldom signed before she lost control of her company in 1950, so confirming a piece as Miriam Haskell requires a degree of research. (A good reference book for this task is Miriam Haskell Jewelry co-wriiten by Cathy Gordon and Shelia Pamfiloff alongside the well catalogued advertisements produced to promote each new range). It was her brother, Joseph Haskell, who upon taking over the company introduced a Miriam Haskell signature, perhaps to strengthen the association between the jewellery, his sister, and their customers now that she was no longer at the helm of the company. That said, for very short period in the late 1940s, a New England jewellery shop did enforce a signature on her jewellery in the form of a horseshoe shaped plaque embossed with Miriam Haskell. These pieces probably constituted less than one percent of early jewellery production and as such a piece with this signature would now be a rare find.

This interest in Miriam Haskell jewellery also extends to collecting contemporary advertising watercolours produced by Larry Austin to promote her jewellery. These typically featured sophisticated looking models wearing the fashions of the day whilst sporting larger than life examples of Miriam Haskell bracelets, necklaces, and pins as seen below. 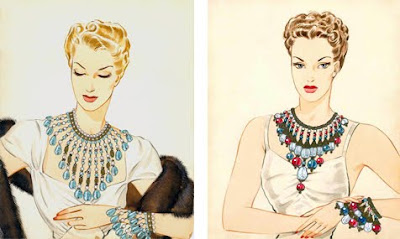 Pin It
Posted by Unknown at 11:39
Email ThisBlogThis!Share to TwitterShare to FacebookShare to Pinterest