In my role as Fashion Editor for the Bead Society of Great Britain I wrote this article for the last edition of the quarterly Bead Society Journal. It describes the religious origins of Shamballa Bracelets, set against the phenomena that the introduction of this style of bracelet has created in the worlds of fashion and celebrity. With the Journal safely in print and distributed I thought I would now share this piece with a broader audience. Shamballa Bracelets have in recent months gained the same huge popularity as the well established Pandora charm bracelets, reproducing themselves at a great rate across all market sectors, from high-quality investment jewellery to cheap and cheerful fashion pieces with a short life-span. The bracelets feature crystal encrusted orbs threaded onto cord and finished with macramé knots. They are popularly known as shamballa, pavé bracelets, disco ball bracelets or macramé bling bracelets, the latter names summing up their eye-catching feature beads. Locally, I can buy Chinese-made glass crystal bead bracelets from a market stall, high street fashion shops stock their versions (most likely also made in the Far East), or, if funds allow, I could indulge in a Tresor Paris crystal bracelet from a traditional family jeweller that has been trading in our town for over 250 years. The original design and concept, that has launched a myriad of imitations, originates from Danish jewellery company Shamballa Jewels. If imitation / emulation is indeed the sincerest form of flattery, then this company should be feeling the warmth of an infinite number of flatterers. 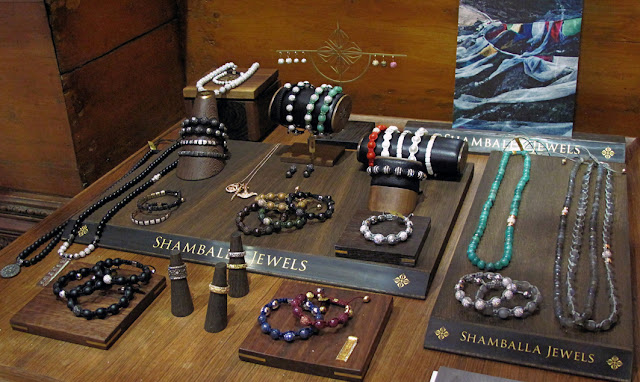 Shamballa Jewels is a jewellery company owned by two Danish brothers, Mads and Mikkel Kornerup. They launched their first jewellery range of high-end fine jewellery, including the Star of Shamballa Collection, in 2004. The jewellery was luxurious, exquisite, fashionable and discreet.  Tasteful, simply styled jewellery that could be worn with couture or with edgier fashions. The bracelets from the Star of Shamballa Collection consisted of spherical beads of precious and semi-precious materials threaded onto nylon macramé cords and finished with a sliding knot clasp. The range saw immediate success and was championed by French Vogue, many couture fashion houses and celebrities from the worlds of sport, film, music, as well as the stylish and the plain wealthy. To quote in part from the mission statement on the company’s website, Shamballa Jewels state their intention is

‘…to create jewels of the highest quality. Jewels which trigger curiosity and inspire to conversation. Jewels that will be passed on for generations.’

The price of the jewellery means it is only an option for the serious jewellery wearer / collector, with a full pavé bracelet of white gold set with 18ct diamonds currently on sale in London for £81,494.  If your budget is set lower you may like an ebony bead bracelet, featuring a bead and a lock of 18ct yellow gold for £1,854.00, or an amethyst and gold bracelet for £2,646. 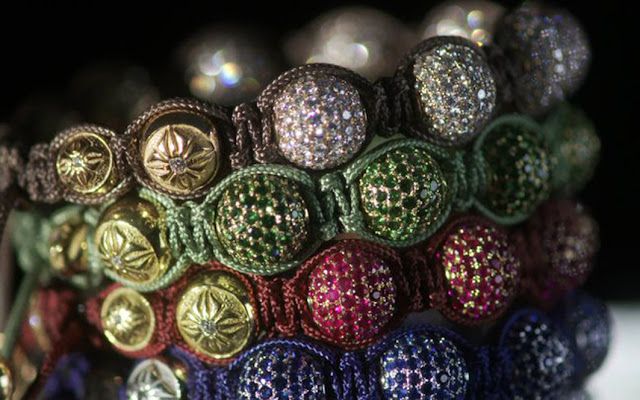 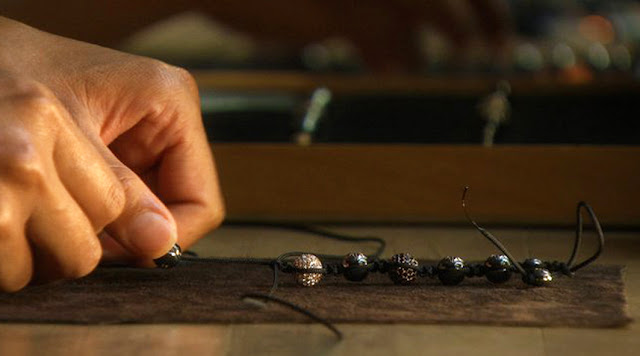 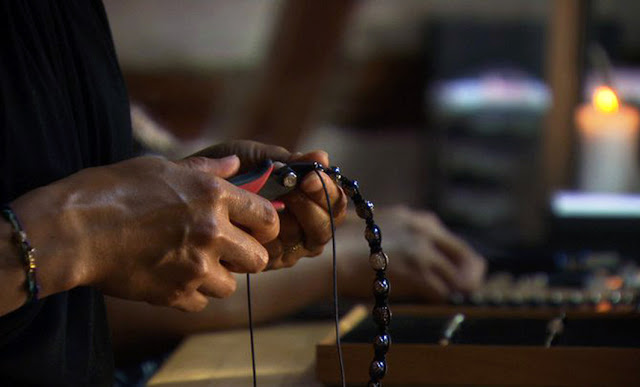 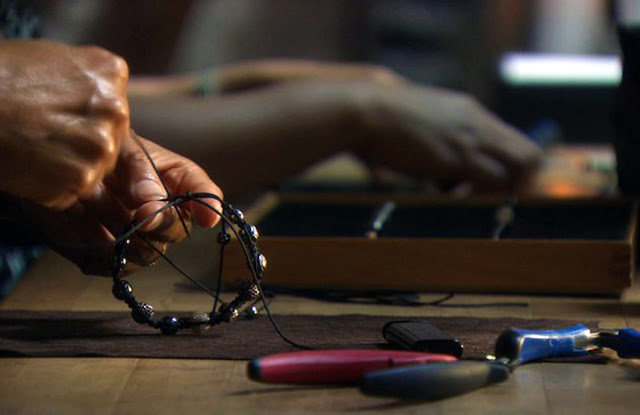 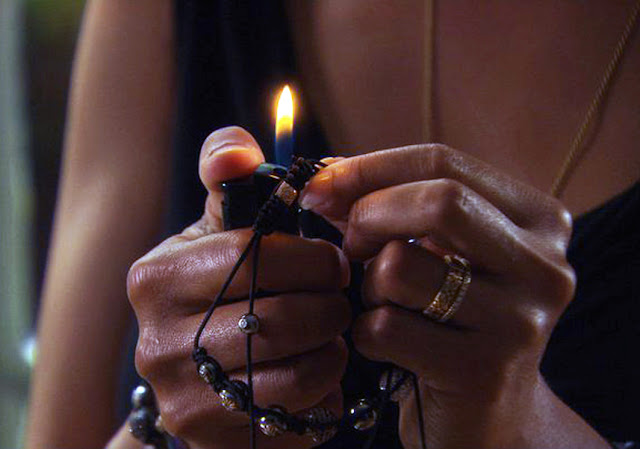 However, despite the obvious luxury of the finished jewellery, the designs are based on spiritual ideals and a more fundamental outlook on life. Eastern culture has a strong influence on the designs created by Mads Kornerup. Many of the symbols that his designs incorporate are inspired by the iconography found in Tibetan and Nepal, and his work also draws upon Buddhist teachings and yoga. To quote again from the website of Shamballa Jewels:

‘The theme of the collections is the energy of creation, symbolized by the Star of Shamballa and the Thunderbolt (dorje). The Star represents the female creative energy of the universe and the Thunderbolt the male firepower of creation. The two symbols are present throughout the collection as a red thread, embedded or carved within the gold, and surrounded with precious gemstones.  By wearing either symbol, one invites the possibility of connecting to the energy of creation.’ Mads Kornerup also states: ‘When formulating the designs, my goal is to remind the mind and body of its natural ability to open and heal.’ The star symbol is intended to communicate to the wearer the metaphysical fact that the human body and a star in the sky are made from the same matter, and that both emanate heat and light.  Like a star we contain great energy and we can shine.'

The structure of the Shamballa Jewels bracelet is derived from the Buddhist Mala, a string of prayer beads used to focus awareness during meditation or chanting, and to assist in the counting of mantras.  Traditionally a red cord holds the beads together and this is symbolic of the bloodline of the Buddha and the lineage of his teachings. A full mala contains 108 beads and a wrist mala 27 (you count your way through the beads three times to reach a total of 108). In addition to the beads used to mark each repeated mantra, there is also a meru / mountain / Guru bead. This is a larger bead used to mark the start and finish of each rotation around the circumference of the mala, there may also be a tassel at this point. Whilst many mala are made of modest natural materials such as rudraksha seeds, sandalwood or bone, semi-precious stones may also be used for both their associations with different deities or for their talismanic values. Crystal may be used to inspire clarity of thought and to strengthen and transmit positive energy. Shamballa Jewellery bracelets use many semi-precious materials so they also harness natural spiritual energies to benefit the wearer, although precious metals such as white gold are used simply for their own beauty and intrinsic value. 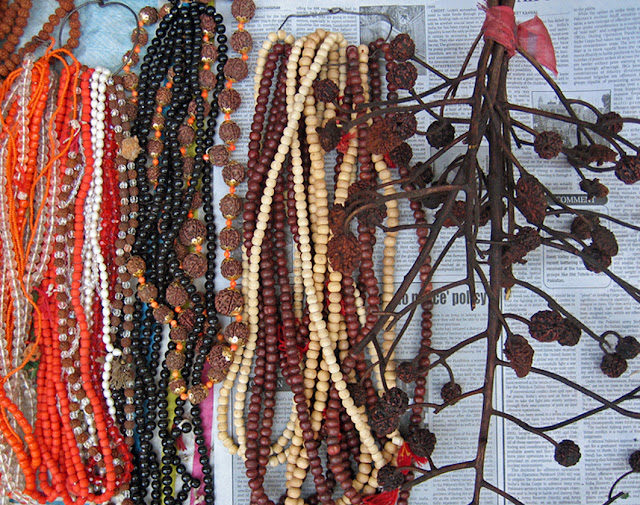 An image of mala for sale in India, including rudraksha seed necklaces and, to the right of shot, rudraksha seeds still on the branch
(Copyright Meena Kadri / Flickr) 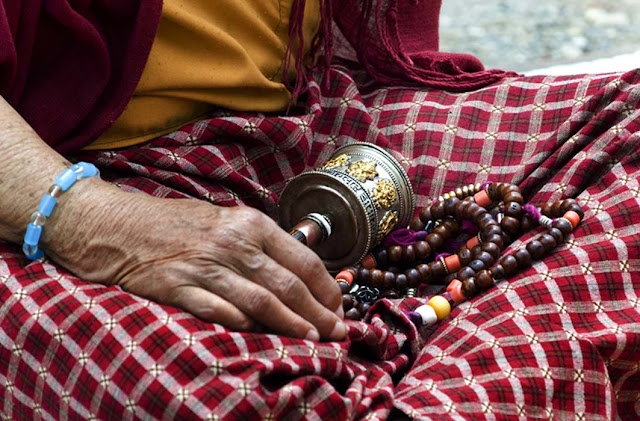 There does seem some irony in the fact that a Buddist prayer tool has been turned into both a luxury accessory worn by the wealthy as a symbol of their spiritual values and as a frivolous fashion item worn as a ‘bit of bling’.

As Shamballa Jewels bracelets attracted the attention of fashion leaders they were soon emulated by other jewellery design houses – for example, Tresor Paris, a brand formed by the Hasbani family, well-known in the jewellery industry as diamond dealers. Tresor Paris jewellery consists of good quality macramé threaded bracelets featuring beads of carved magnetite and beads studded with genuine crystal (rather than diamonds). Colours are bright and appealing, the bracelets worn and endorsed by popular celebrities. Tresor Paris market themselves to younger, image-conscious consumers who are prepared to pay around £150 for a bracelet For those unable or unwilling to pay this, then high-street fashion stores quickly produced their own take on the shamballa bracelet so the shamballa bracelet ‘look’ disseminated right down to teen shoppers who want to emulate their favourite rappers or reality soap stars. Next, for example, sell a range called Shimla Jewellery (‘Taking its name from the Shimla Valley set in the Himalayas, this range of jewellery captures the magical and spiritual feeling of the wearer’ – sound familiar?).

Alternatively, for a truly personal interpretation, there is always the option to make your own version of the style, using large rounds and stringing them onto cotton cord for a bracelet that could be made to match a favourite outfit. The macramé style construction of the bracelets means they are simple and quick to make unlike some costume jewellery. A quick look at a number of bead shops will demonstrate that the shamballa trend has influenced the current stock of beads, with large ranges of Chinese and Czech glass pavé beads to select from and other beads with a hole large enough to accommodate the cord. Independent jewellery maker, Jayne Hussey of Jewellery by JH, has imaginatively created bracelets using miracle beads in place of pavé beads making full use of their reflective qualities and jewel-like colours. Strung on cotton cord recycled from packaging they are everyday wearable pieces of jewellery that exemplify how high fashion becomes something that we can all take part in. 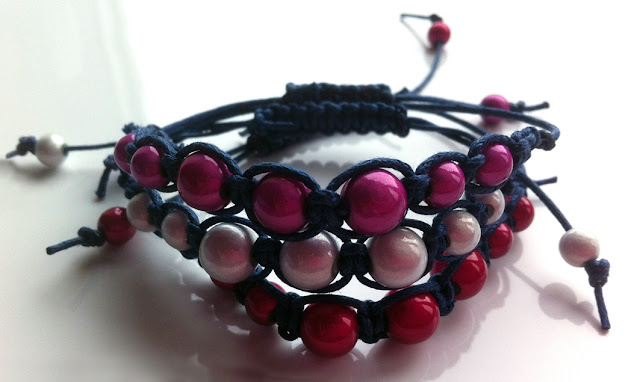 Pin It
Posted by Unknown at 11:28
Email ThisBlogThis!Share to TwitterShare to FacebookShare to Pinterest

A really interesting article and some amazing photos to tell the Shamballa story. Thanks for sharing.
Siân :0)

Many thanks for the article. It's really interesting with good pictures

I found your article Enlightening & Extremely Interesting. I'd always thought the bracelets to be connected with Religion or a Religion & so found it quite amazing this past 18 months or so as they seem to have taken off as the next "MUST HAVE" item of jewellery as with the larger hole bracelets such as Pandora etc... The fact that that most are so Sparkly & full on BLING! Also made me wonder whether it was offending any particular Religion in it being so trendy & glitzy when I thought originally they must have been a more simple item.

Thanks for your article all the way from 'Downunder'
rainbowgems :o)

Truly enjoyed this article, always happy to see the accurate depiction of the shamballa style! I loved the photos showing the process as well, thank you!