Prior to the start of the 20th century, years of simply repeating traditional glass forms had caused the quality and popularity of Murano’s blown glass to decline dramatically. Then, a succession of innovative glass blowers began to reinvigorate Murano as a centre for art glass, abandoning repetitive production and challenging tradition with inventive techniques, whilst embracing contemporary styles and tastes. By the 1950s, Murano glass had redoubled its historical importance and was again leading the world in glass making. But with two World Wars and the economic and political uncertainty that follows any conflict it was not an easy journey.

By the turn of the century the Fratelli Toso glassworks had a fifty-year heritage to rely on, being primarily recognized for its works with murrina. But even with this strong base the outbreak of World War I interrupted the progress of both Fratelli Toso, and the much anticipated recovery of Murano glassmaking in general. The Salviati & C. glassworks (by now without Antonio Salviati and having been renamed Compagnia di Venezia e Murano), had arguably a greater international reputation and grounding than Toso, and yet it ceased production in 1909. This followed the sale of the company by its British backers, archaeologist Austen Henry Layard and antiquarian Sir William Drake, to a Venetian businessman named Tosolini, who owned a number of shops along St. Mark's Square. Under his management, the company stopped production and focused solely on commercial distribution from these retail outlets.

It was left to a partnership between two Milanese outsiders to bring about the change that had been promised in Murano at the turn of the century. Paolo Venini and Giacomo Cappellin came to Venice from Milan with the express intention of rejuvenating the Venetian glass industry. In 1921 they formed Vetri Soffiati Muranesi Cappellin, Venini & C.


Paolo Venini was a lawyer with no experience of glass blowing, but he did have an entrepreneurial spirit, an openness to new ideas, and a willingness to collaborate with other artists and specialisations, such as architects. Giacomo Cappellin, a Venetian by birth, was an art dealer who owned and operated an antique shop on Milan's via Monte Napoleone (now famous as the premier street in the Milan fashion district). The company’s focus was to be the modern design trends that were sweeping the world and that had been the centre for debate in artistic circles in Milan. The designs were to be along simple lines, using the thinnest of transparent glass, and with delicate colours, all contrasting strikingly with the fashion for heavy decoration of the time. They brought in Vittorio Zecchin as artistic director and began production.

Their new designs were immediately recognized both in Italy and abroad. Much of this success was down to the fact that from the outset Venini’s main goal was to expand his company’s influence overseas. To achieve this he sought the collaboration of the most talented artists of the time. He also worked alongside his designers, with the aim of directing taste whilst personally checking every collection produced under his name. His confident direction, along with the fine quality of the items produced assured the glasshouse this critical and commercial success. With the confidence that this gave the company they opened sizeable retail shops in Venice, Paris and Milan. However, the partnership didn’t last long, and in 1925 Venini and Cappellin parted company after just four years, to establish independent glassworks.

Paolo Venini started Vetri Soffiati Muranesi Venini & C. in 1925, hiring Napoleone Martinuzzi as manager of his new venture. At the time Martinuzzi was a sculptor overseeing the Murano Glass Museum. He developed the pulegoso technique which in 1930 proved to be a watershed moment, since opaque glass completely broke with tradition and opened up a whole new direction for creative thinking and experimentation. The first vases made by Venini with this new material were hailed by the critics who saw the Murano glass industry rising up again.

In turn Giacomo Cappellin also opened a new furnace in 1925, Maestri Vetrai Muranesi Cappellin & C., retaining Vittorio Zecchin as artistic director as well as the majority of the master glass blowers from the previous firm, notably Diego Barovier, Attilio Moratto, Malvino Pavanello and Giovanni Seguso. In 1926 Zecchin left the firm to be replaced by a then unknown architect, Carlo Scarpa. This firm was to close in 1932 due to financial mismanagement, but not before Scarpa had made a reputation for himself that in time would see him become one of the most innovative artistic glass workers of the century. His first few years at the firm saw production continue to be influenced by Zecchin’s designs whilst the new company found its feet, but Scarpa then found his own direction with the re-introduction of historical techniques, the use of opaque glass, and bright colours.

The closure of the Cappellin furnace coincided with the departure of Napolene Martinuzzi from Venini to set up his own furnace in partnership with Francesco Zecchin, an engineer by education, who had also worked at Venini’s. This left an opening at Venini for an artistic director which Scarpa filled. His use of innovative techniques flourished during his time at Venini & Co. In addition to creating new ways to work with molten glass such as sommersi, he developed new surface treatments including corroso, battuto, fasce and pennellate. Paolo Venini also started to take a more active role in the day to day operations of the glassworks and began co-designing works with Scarpa. His diamante glass pieces date from 1936, and he created the murrine romana in collaboration with Scarpa. Following the war, he created bottles with brightly coloured stripes, vessels in mosaico zanfirico and mosaico tessuto, windows in vetro mosaico, and battuto vessels. In collaboration with Fulvio Bianconi, in the early 1950s, he created vessels such as the fazzoletti, or handkerchief vase, which is a classic example of the production of the time and were enormously successful.

Another entrepreneur and designer of note, who rose to prominence in the 1930s, was Ercole Barovier, son of Benvenuto Barovier. With his brother, Nicolo, they took over the creative direction of their father's company, Vetreria Artistica Barovier & C. In 1939, after the brothers went their separate ways, the company was renamed Barovier & Toso C., after Ercole brokered a successful merger with Decio and Artemio Toso who were now managing the Fratelli Toso. Over the course of his 50-year career, he invented numerous decorative techniques which contributed significantly to the rejuvenation of art glass. In the 1920s Barovier was known for his work with murrina and the totally original primavera glass collection. He spent much of his time during the 1930s experimenting with new multi-coloured effects, finally perfecting a technique he named colorazione a caldo senza fusione. In the post war period his interest turned to traditional techniques and which he would reinterpret. During the 1950s and 60s he presented new interpretations of the tessere technique.


It was through Pauly & C., a company born in 1903, and a series of mergers and acquisitions that the early work and designs of both Salviati and Cappelin were returned to production. The company was formed by Emilio Pauly, Alessandro Hirscber Hellman, Vittorio Emanuele Toldo and Ernesto Graziadei. In 1919, Pauly & C. and Compagnia di Venezia e Murano were both purchased by the Milan Società Anonima Sanitaria, which subsequently resold them the following year to Gaetano Ceschina of Milan. This newly merged company, now renamed Pauly & C. – Compagnia Venezia Murano, resumed production of glass on the island of Murano in 1925.

The company grew again in 1933 with the acquisition of Maestri Vetrai Muranesi Cappellin & C. (or MVM Cappellin), the glass company formed in 1925 by Giacomo Cappellin following his split away from Paolo Venini. This gave Pauly & C.  the rights to the works and designs of MVM Cappellin, including the historicaly important early designs and techniques of Vittorio Zecchin and Carlo Scarpa.

Through the efforts of all of these firms, and their master glassmakers, Murano glass survived the test of two world wars. With new market places opening up through increased travel and tourism the 1950s and 1960s were to be an artistically memorable period. Production also moved into new areas with the growth of specialist lighting companies, as well as jewellery producers, and high end glass sculptors and artists. Other areas were also largely lost to Murano due to inflated productions costs. Bead making being one such industry where production shifted to Japan, India and China, with only the Czech Republic retaining a strong market presence in Europe. The few bead makers that have survived in Venice and Murano have had to find a niche at the high end of the market.

The next challenge for Murano, and indeed for any prestigious products, proved to be the problem of counterfeiting. In the 1980s onwards, factories in Asia began producing 'replicas' of classic Murano glassware, vases, and millefiore objects, including beads. Over the next twenty years the sophistication of the production processes began to mirror those of Murano but at a fraction of the labour costs. By way of an example, the bead making industries in India began making rosetta or chevron beads in the mid 1980s using pre-prepared sections of hot strips of glass that were then composited together to form a cane. Due to the limited nature of this manufacturing process these 'impostors' could be identified by the misaligned points to the chevron stars. Ten years in later in China chevron beads were made from moulded star canes in exactly the same manner as Venetian chevron beads and it is now difficult to tell the Chinese version from a bead produced in Murano.


In order to maintain the integrity of their products and to safeguard their profits the Promovetro, or glassmakers consortium, came up with a Murano trademark (designed by French artist Mathieu Thibautto ), a lilac sticker that displays a cana de soffio or glass blowers pipe and the Italian words, Artistic Glass Murano. The intention being to make their glass more difficult to copy. This was registered with the European Union in September 2002 and can be seen below: 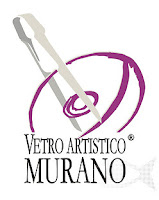 Today, some of the most important brands of glass in the world are still produced in the historical glass factories on Murano. Most notably Barovier & Toso, Venini, Pauly and Seguso. With Barovier & Toso officially recognised by the Guinness Book of World Records as one of the 100 oldest companies in the world, formed in 1295.  With this depth of history and such a long list of notable master glass makers it is only fair to forgive them the quality of the glass souvenirs they sell to tourists following their strictly timetabled furnace tours!

Pin It
Posted by Unknown at 00:24
Email ThisBlogThis!Share to TwitterShare to FacebookShare to Pinterest